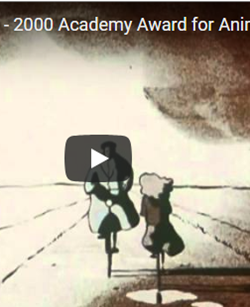 This is a  Dutch animated short film, made by Michaël Dudok de Wit. It won the Academy Award for Best Animated Short Film in 2001. A father says goodbye to his young daughter. Time passes and the daughter moves through life age by age, but within her there is always a deep longing for her father.