Get Comfortable with Death 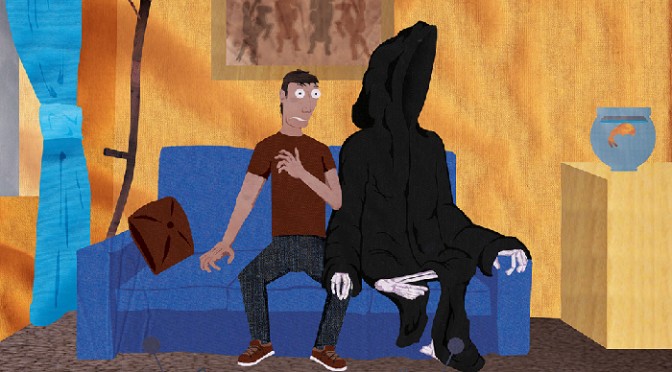 Gallows humour is often discussed as ‘laughter in the face of pain’. Galgenhumor, which finds its origins around 1848 Germany, is referred to as ‘cynical humor that derives from stressful or traumatic situations’. However, it has been in practice for many centuries. It is used as a way of getting around situations that are otherwise overwhelming or unavoidable in nature such as death, war, disease or horrific crime.

For example police officers and detectives have talked about cracking jokes around a particularly gruesome death scene, not because they are insensitive to the dead, but because the individual making the joke may need a way to get through an otherwise intolerable situation.

The jokes are typically made by or about the victim of such a situation, but not the perpetrator of it. In this way, gallows humour becomes a form of coping mechanism or psychological shield.

Sigmund Freud in his 1927 essay Humour (Der Humor) puts forth the following theory of the gallows humour: “The ego refuses to be distressed by the provocations of reality, to let itself be compelled to suffer. It insists that it cannot be affected by the traumas of the external world; it shows, in fact, that such traumas are no more than occasions for it to gain pleasure.” Some sociologists have elaborated this concept further. At the same time, Paul Lewis warns that this ‘relieving’ aspect of gallows humour depends on the context of the joke: i.e. the joke is being told by the person being threatened, or by someone else. [1]

Gallows humor has the social effect of strengthening the morale of the oppressed jokester (such as prisoners of war) and undermines the morale of the oppressors. For this very reason Nazi Germany banned joke telling. Not only was joke telling illegal, it could be punishable by death. [2] According to Wylie Sypher, “to be able to laugh at evil and error means we have surmounted them.” [3]

Some examples of Gallows Humour:
Sir Walter Raleigh was beheaded in the Old Palace Yard at the Palace of Westminster on 29 October 1618. After he was allowed to see the axe that would behead him, he mused: “This is a sharp Medicine, but it is a Physician for all diseases and miseries.”

Author and playwright Oscar Wilde was destitute and living in a cheap boarding house when he found himself on his deathbed. There are variations on what the sentence exactly was, but his reputed last words were, “Either that wallpaper goes or I do.”

James French, a murderer serving a life sentence in Oklahoma was so afraid to commit suicide he murdered his cellmate in order to force the state to execute him. He has been attributed with famous last words before his death by electric chair: “How’s this for a headline? ‘French Fries’.

For more cartoons and musings on gallows humour, watch this space.

Up next: more cartoons from Sam Price, along with an article by Nichole Force on Humor as a Weapon, Shield and Salve.