J is for JAR BURIAL 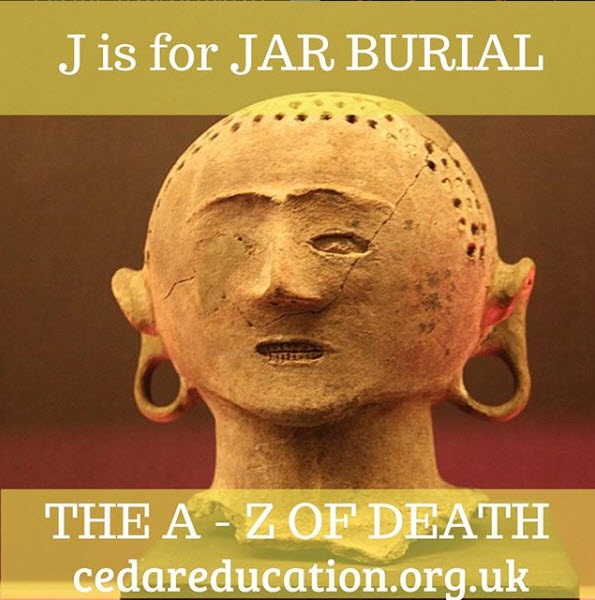 In some cultures human remains were placed in jars rather than buried in the ground. This particular image is of the ‘lid’ of such a jar, a number of which were comparatively recently discovered (1991) in caves in the Philippines. The jar lids in the form of a head were all different and were taken to represent the person who had been interred within. Some of the jars had breasts, indicating the occupant was female, some had a penis-like projection at the bottom of the jar. These particular examples date back to around 2000 years ago. Jar burial was used as part of a two-stage process – referred to as ‘wet’ and ‘dry’ burial. The body remained in the jar (which had holes in the bottom) whilst it decomposed – this could take months or even years, depending on the climate. The bones were then transferred to their final resting place. This particular style of jar, with the sculpted heads, were actually used for the ‘dry’ part of the ceremony – only the bones were placed inside so they are somewhat smaller than the jars used for the ‘wet’ burial. Occasionally artefacts have been found buried in the jar – beads, jewellery etc. A fascinating alternative to being interred. #death#burial#burialgrounds#disposal