Why the only future worth building includes everyone 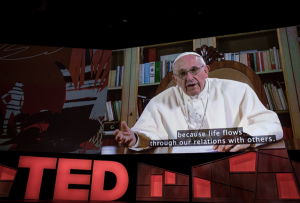 Whether or not you follow a particular belief or have no belief, moral values in an age of anxiety will always be of benefit if you want your community to thrive. At CEDAR we strive to remain neutral in our teaching and understanding of death, dying and loss. This becomes particularly important in light of the 22 May 2017 bombing at the end of the Ariana Grande concert at the Manchester Arena. Below is a special message from Pope Francis as he addresses an open TED (Technology, Entertainment & Design)  Talk audience prior to the bombing. Whilst no one could predict what the future held at the time he delivered his message, more than ever we must realise how important we all are to each other. I particularly like what he has to say about ‘hope’ and just how little of it we need in order to change the world…

While spoken by a religious leader, the message of communication and compassion is a universal one, which should be considered apart from the Christian ideology, the Pope may endorse. However, part of being open-minded and learning what is right, is to listen or explore ideas, wherever they may come from, that are beneficial to everyone. Young people are our future and as a result should be cherished and honoured as much as possible.

TED worked for a year to arrange for the Pope to speak from the Vatican to the TED audience in April 2017, and his message of hope and inclusion was very strong and well received. His main message was that the only future worth building is one that includes everyone. I highly recommend his 18 minute talk, which you can watch at the link below:  He speaks in Italian with English subtitles.

Search
Recent Posts
Categories
Archives
CEDAR  Education
CEDAR  Education  is  dedicated  to  teaching everyone  how  to  understand,  accept  and  respond to  death,  dying  and  loss  in  healthy  and appropriate  ways  with  clients,  patients,  students, and  in  personal  relationships.
Recent Posts