“You can’t negotiate with death, but you can negotiate the way you die” 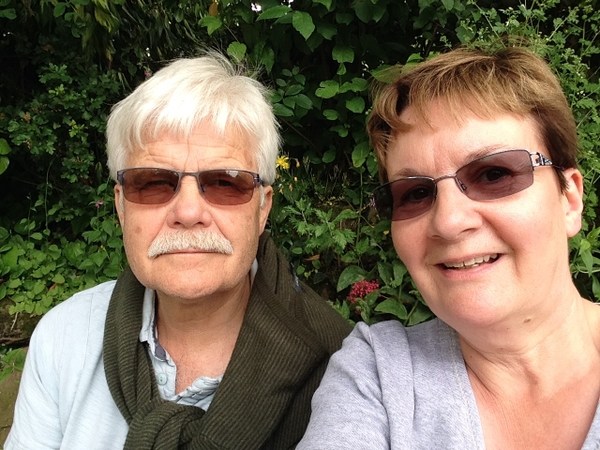 CEDAR volunteer Marion Dakin writes about the cuts in funding to the Severn Hospice. Her partner Bruce Jackson died aged 64, from long-term cancer of the oesophagus.

Bruce had been on palliative care, during which time he twice chose to use the beds at Severn Hospice in Telford.However, the charity has just been told that there is a cut of £250,000 in this years funding, leading to the loss of 2 hospice beds.

Marion is concerned that more people will now have to go through the tougher times she did with Bruce when he was unable to get a bed at the hospice. Bruce, who lived with Marion at Childs Ercall, was diagnosed in 2015, and his condition deteriorated quickly in 2017. He ended his course of chemotherapy, which was intended to prolong his life rather than cure his disease.

He went into the hospice in September of that year, but after being discharged he fell extremely ill again with a few days. With no space for him at the hospice, he needed to be cared for at home. “It was incredibly stressful,” says Marion. “You don’t know what you don’t know until it happens. If you live in a rural area and you can’t get pain relief then you have to use the call-out service and that can take two hours to get to you.

“When you are looking after someone at home with complex needs, which is often the case with those on palliative care, then there comes a point where you need to be able to call someone urgently. That was the horrendous part and you don’t imagine this will happen. It’s the scary thing. You can’t do anything to make it any better and you are left struggling.”

“Getting a bed is not just about the medical benefits for the patient, but from a carers view you know that they will be alright, that they are in the right place,” adds Marion. “I was able to get a good night’s sleep as when Bruce was at home I would often be listening out for him to check he was not choking.

“The situation is so up and down. It’s a bit like surfing. One moment you are at the top and and the next you are drowning. We got a bed twice and but when we didn’t get it we just had to struggle on.”

Bruce died in December 2017. Marion, who now lives in Church Stretton, says she was shocked to learn about the cuts.

“I think the CCG haven’t really considered the issues at all and are being prejudicial to people at the end of their life,” said Marion. “I know it is a struggle for CCGs and I understand it. But what they haven’t done is make a management decision based on need.”

A Private Members’ Bill in parliament, awaiting a second reading, will require “the provision of comprehensive palliative care to those with terminal illnesses”.

This would include over-60s, and require certain public bodies to co-operate with hospices in providing palliative care.

The CCGs decision has drawn criticism with the leader of Telford & Wrekin Council saying it had delivering a “kick in the teeth” to the town while Shropshire, Telford & Wrekin Defend Our NHS says it should not be allowed to happen.

CEDAR Education runs courses on death education across the West Midlands – latest courses and workshops can be seen here https://cedareducation.org.uk/category/events/